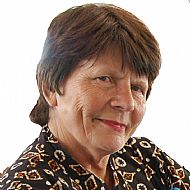 Janine Susan Cooper (nee' MacDonell) first visited the Black Isle in 1965 when her parents bought a holiday cottage in the village of Jemimaville.  In 1981 she moved there having lived in England, Italy, Belgium, France and the USA with her first husband.  Her two sons were born 'en route'.

Susy has always loved art and in 1981 she completed a BA (painting) in Connecticut, USA before settling in Jemimaville as a single parent.  While bringing up her family she worked part time as a teacher of art at the local special needs school and studied Art History from home through the Open University - gaining her second BA in 1984.  Susy was granted a year out to study for a Post Graduate Certificate in Education (Art and Design).  She continued working at the school until an opportunity to work for a year in Japan arose in 1992.

After returning to 'base camp', Susy continued the travelling theme by becoming a Visiting Teacher of Art in Ross-shire visiting schools as far apart as Gairloch and Invergordon.  Latterly she taught part time at St. Clements School for Special Needs until her retirement in 2011.

Susy is attempting to return to painting and is grateful to her husband Charles for building a studio (the bottle store of the former Ferry Inn) within Ferry House in which to paint and 'The Workshop' in a corner of the former pub car park.  Although more interested in colour and the form of natural objects like shells and plants, she appreciates the beautiful Highland landscapes and hopes to achieve a sense of peace in future paintings, be they still life or landscapes